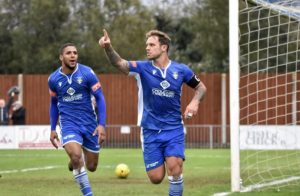 Ryan Henshaw scored the only goal against Brentwood Town. The skipper’s second half strike was his second in three games, as the Blues continued their unbeaten start to the season after five games.

After a slow start, the Blues first chance came from a free kick after Shad Ngandu fouled Ben Marlow. Joe Boachie took it but could only hit the wall, and his follow-up effort was also blocked. Making a run out of the defence, Henshaw whipped a cross from the right into the box, with Correy Davidson ready to apply the finishing touch, goalkeeper Preston Edwards took the high ball well. Jack Giddens did well to keep a corner out at the other end, punching it high and over the crossbar amongst a crowd of bodies around the goalmouth, before 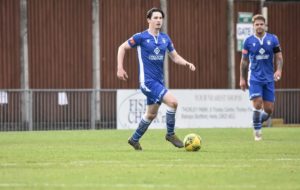 Andrew Freeman headed the follow-up corner wide of the goal. Robert Swaine combined with Joseph Heath from the next corner, with the skipper heading back across goal to his centre-back partner but he could only head over the bar. Kudas Oyenuga also had a chance to open the scoring for the visitors, but his shot from the edge of the box was straight at 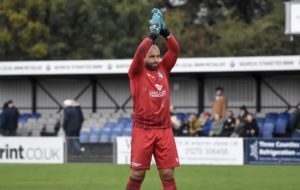 Giddens, before Henshaw and Mark Haines blocked consecutive shots from a well-worked short corner. Jack Thomas had a great game in the middle of the park, winning the ball and driving the team forward, his through ball to Davidson got the winger into a good position but his cross couldn’t find a team-mate in the middle. Marlow’s low shot from outside the box was off target, before Giddens got down well to meet Andrew Freeman’s low cross. Archie Jones was in the wrong place at the wrong time, blocking his own team-mate’s effort from the edge of the box as Frankie Merrifield looked for the bottom corner. Merrifield laid it off to Marlow from the next attack on the edge of the box, but his effort was cleared, before Haines headed wide from Davidson’s cross. The best chance of the half came right at the end, with Merrifield shooting from close range, only for Edwards to make a great diving save to deny him. 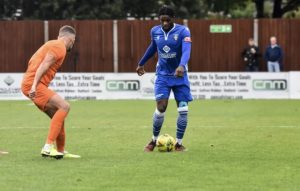 changed the game, the latter having the first chance after the break from Merrifield’s flick on before Jake Gould hooked the ball away from danger. Foxley then made an inch perfect cross to Merrifield at the back post, but he blazed his shot over the bar, before Jones fired wide from the edge of the box. Edwards was out quickly to close down the angle for Greene to shoot, before Greene was adamant that his shot hit a Brentwood player’s arm in the box. A right wing cross fell to Oyenuga in the box but he was flagged offside before he could shoot, and 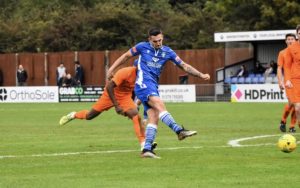 Marlow’s half-volley attempt was pushed wide by Edwards. Foxley’s cross from the left missed Merrifield’s head but Henshaw was unmarked behind him for a tap-in from six yards to break the resistance of the Isthmian League North Division opponents. Heath got his head to a cross from a short free kick but put it over the bar, as the visitors pushed for an equaliser to force a penalty shootout. Substitute Joshua Gray missed a brilliant chance to level up the scores, when he skied his shot from close range after a cut back from the right. He fell to his knees in disbelief over what he had done, before referee Jack Bloxham blew for full time after Giddens had taken the goal kick. 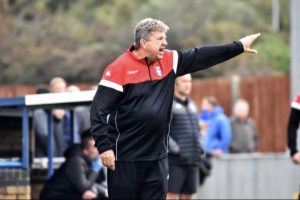 Bishop’s Stortford host Folkestone Invicta on Tuesday 6 October in Pitching In Isthmian League Premier Division action, before travelling to Cray Wanderers on Sunday 11 October. The draw for the Third Qualifying Round of the FA Cup will be made on Monday 5 October.