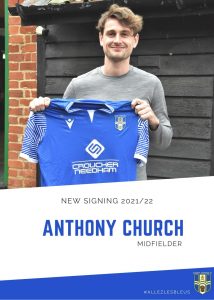 The Club are delighted to announce the signing of midfielder Anthony Church. He is returning to the club for a second spell, having made 116 appearances with the Blues between 2013 and 2016, before joining up again with Rod Stringer at Chelmsford City, spending five years at the Clarets before his return.

In an interview with the club’s media team, ‘Churchy’ explained why he chose to return to Bishop’s Stortford: “The club seems to have huge ambition now, definite a club I want to be a part of to try and win something.
All the feedback from the players I knew already was really good, about the setup at the club, about what the ambitions are for this year, it felt like a good fit for me really.
I spent three years here before, enjoyed my time at the club, it feels like I’m coming back to somewhere which hopefully is in a different place to try and push forward again.”

Talking about his style of play, and how his game has changed, he said, “I’m still fully committed as a player, I want to win, I’m uncompromising at times, I feel like I’ve matured a lot in five seasons at Chelmsford and I feel like I can probably learn to control my temperament a little bit more than what I used to.”

Church also expressed his desire to win something with the club, “I was at Wembley on Saturday watching a few of my friends play for Hornchurch and it was just an amazing day for them, amazing to go and support them and for them to create a memory like that, I suppose that’s certainly why I play the game, hopefully we can try and emulate that success.”

He said he has already settled in to the squad, and feels like it’s a close knit group of players, saying, “I know a few of the players already really well, and we’ve been doing some strength and conditioning sessions, and you can feel it already, you can feel the group’s together and got a really good cohesion, we seem to have really good lads, humble enough lads that want to work and not every dressing room is like that.
It’s only early days, but I’m getting a feeling, a sixth sense that this is a group that have bonded and really get on well and hopefully the success that they had last year, with the season being cut short, we can try and push on again, and have a successful season.”

Church highlighted the push for promotion as the main target for the upcoming season, “I’ve been at a club the last few years where promotion was the remit and I’ve been told that here.
You want to win, you want to create memories, I make no bones about it, to get promoted out of this league, I still felt like I was more than capable and I had options in the league above, I’ve come here to help hopefully to try and contribute getting the club back where it deservedly belongs to be.”