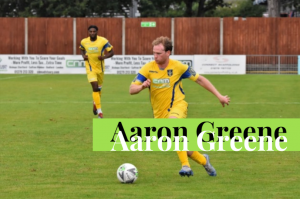 Aaron re-joined Stortford in summer 2019 for a third spell. His first spell was late in the 2012-2013 season and he made a goal-scoring debut when netting in a 2-1 victory over Hemel Hempstead Town in a Herts County Charity Cup semi-final tie. Aaron has, in all, made 33 appearances for the Blues and scored 5 goals. He began the following season at Harlow Town before joining Chelmsford City in December 2013. Aaron then joined Brentford and was in the West Londoners’ Development squad and playing in their under 21 side. Whilst with Brentford Aaron had a spell on loan with Boston United. After his release from Brentford he had a second spell with Stortford and won the supporters “Player of the season” award at the end of the 2016-2017 season. Aaron also had spells at St Neots Town, AFC Sudbury and Heybridge Swifts before joining Enfield Town from Chelmsford City in August 2017. He was a member of the Enfield Town squad that won the Velocity Trophy at the end of last season. Both Aaron’s father Dave and his uncle Dennis have also played for Stortford.

Aaron Greene made his first pre-season appearance of the 2020-2021 season against Enfield FC, scoring his first goal of the season.