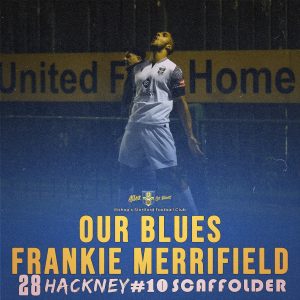 How’s it been for you returning to the club after your first spell in 2014?

It’s been a pleasure being back here for a second spell, the club has improved massively! A lot of positive stuff going on behind closed doors and it’s showing in our performances on the pitch.

You’ve scored some important goals this season – do you have a favourite?

My favourite would be my goal against Hornchurch when we played them at home earlier in the season because I missed a penalty in the first half  but went on to score the winning goal in the second.

How have you found switching between midfield and forward positions this season?

When I’m needed in midfield I know I can do a job there and help the team out – as long as we’re winning, that’s all I care about. Chipping in with some goals is a bonus.

You’re currently our top-scorer for the season, do you set yourself targets in pre-season?
I don’t set myself targets, I just try to be as sharp as possible, it’s been an up-and-down season for me personally, dealing with injuries and setbacks. I’m hoping I can stay fully fit till the end of the season and help the team get over the finish line.