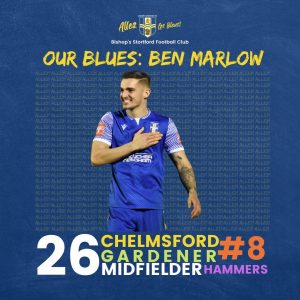 I work for one of my best pals gardening company (Tom Wraight) who’s currently at Hornchurch.

How special has this season been for you so far, given that you scored in your first game back from an injury layoff, and have gone on to cement yourself in the starting XI?

I’m really pleased with how it started scoring on my first game back. Admittedly, it took me a good few games to get back fully firing again, but now I feel as though I’m back to my best and will hopefully only get better from here.

How do you feel the changing room at BSFC compares to those at your previous clubs?

I’ve been in good changing rooms, but this group of lads, staff, people behind the scenes…I haven’t been in any better! Everyone’s aiming for the same goal and doing things the right way across the club – hopefully we can repay that on the pitch and get the club promoted.

What can you say for the progress you’ve seen at the club since you joined 18-months ago?I think the group of players Steve brought in and the players he kept from the previous year show the ambition of the club. We want to win things this year, and I think we are showing that as a team. Long may it continue!

What’s it been like for you being a part of a squad that’s looking to get promoted, with one eye on the league title?
That’s what you want as a player – it’s exciting. The buzz of being promoted and winning things with your mates is something special. It’s the reason we play football, to create those type of memories.

How is the squad looking to react against Brightlingsea Regent F.C, after our unbeaten run came to an end away at Hornchurch F.C?
We need to win, simple as. Every game we play we have to go in with a must win attitude. It’s very tight at the top the table, with some good sides up there. You can easily slide down the table. We want to be in and around the play offs.