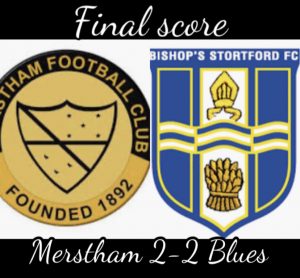 Bishop’s Stortford drew 2-2 with Merstham after twice leading at the Whisky Bible Stadium.

It’s the Blues first draw in the league for 26 games, with the last coming back on 9 March when the points were shared when it finished 1-1 away to Corinthian Casuals.

For Merstham, it ended a run of 10 straight defeats, with their last win coming on 14 September, and they came back twice from a goal down to see the match end all square.

Ryan Charles had the first chance of the match early on, but his long range effort went high of the bar, before Ryan Henshaw – making his 50th Blues appearance – half-volleyed from the edge of the box into goalkeeper Matte Pearson’s arms.

Henshaw was in action at the other end, blocking Omar Folkes’ shot and clearing the resulting corner.

Jordan Wescott, returning to the Blues having played at the ProKit UK Stadium for Cheshunt earlier in the season, and he was required to block James O’Halloran’s low effort across goal.

Yannick Monga played a low cross from the left that missed most of his team-mates, but Chace Jaquart found an effort, but Fred Burbidge was able to tip it over the bar.

A low cross by Charles from the left looked perfect to find Cureton at the back post, but O’Halloran nicked it away at the last second to concede a corner.

Then from the corner came the opening goal, with Alex Warman’s out-swinger finding Henshaw’s head, who flicked on to Cureton to convert from close range.

The hosts’ equaliser caused some controversy, with corner taker O’Halloran being credited with the goal after it appeared to hit debutant Jayden Sweeney, rebound off the post and come out again, with the referee’s assistant making the decision that it had crossed the line.

Sweeney headed away a dangerous O’Halloran cross, before David Manu couldn’t beat Pearson in the air to Charles’ cross.

After a slow start to the second period, Sweeney got his debut goal – making a good run down the left, he combined with Warman for a one-two, and his low shot beat Pearson at the near post.

Shomari Barnwell created some space for a left footed shot, but he fired straight at Pearson from range, before Manu made a powerful run into the box, but by the time he took his shot he had run too far and could only shoot high of the goal.

Charles had a shot deflected behind for a corner, but Merstham were able to clear and at the other end they equalised again, with Jaquart volleying home unmarked from close range.