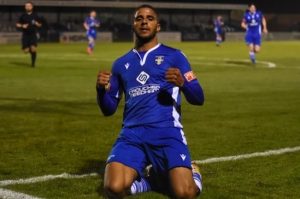 Frankie Merrifield scored a hat-trick as Bishop’s Stortford made it back-to-back wins and continued an unbeaten start to the season against Enfield Town on Tuesday. The summer signing from East Thurrock United opened his account from the penalty spot before getting his third in the second half. Town – who last met the Blues in the last game of the curtailed 2019-20 season – reduced the deficit to 2-1 at half-time as Lyle Della-Verde scored, but Merrifield’s third and Tom Richardson’s goal off the bench completed a convincing win.

Straight from the kick-off, Enfield Town were on the front foot, winning a corner with the first attack, and Ryan Henshaw needing to clear a dangerous cross by Jonathan Muleba from the right. 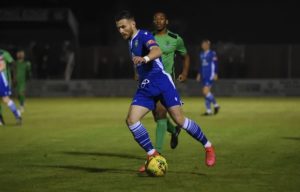 Correy Davidson got in down the left, played the ball inside to Archie Jones who switched it to Darren Foxley, but the through ball was intercepted. Muleba beat Sam Mvemba and was again allowed to cross, this time Jack Giddens commanded his area and collected the loose ball. Davidson whipped in a left wing free kick towards Henshaw at the back post, his nod down found Ben Marlow but Town managed to clear before he could shoot. Cutting in from the right, Foxley tried a low effort but Nathan MacDonald got down well to save, before another teasing cross by Muleba from the right found Giddens’ gloves. Town captain Mark Weatherstone gave away a clumsy penalty when he and Merrifield were jumping for the ball, referee Jack Willmore judged Weatherstone to have pushed the Blues striker to gain an advantage. Tom Richardson – who scored twice from the spot to earn a draw against Bognor Regis Town – was on the bench so it was down to Merrifield to take the spot kick, and he rifled it straight down the middle. There was almost an instant response from town, with Perry Kiangabeni connecting well with a half-volley on the edge of the box, but Giddens was equal to it and got down well to save. Merrifield’s second came just minutes later, with Weatherstone involved again, his clearance from Marlow’s cross fell to 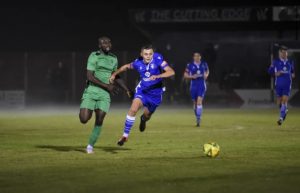 Jones in the box, who found Merrifield in space unselfishly for a tap-in. Jones could have had another assist, had Davidson’s shot from the edge of the box been the other side of the woodwork from the edge of the box. And the Blues were punished for missing chances, as Della-Verde caught Giddens out at his near post, curling one in from the right wing to halve the deficit. With the wind in their sails, Town would have equalised had Davidson not acrobatically cleared off the line, before Giddens could only parry the rebound effort for a corner.

With Town looking more likely to score the fourth goal of the match, half-time was welcomed by Steve Smith’s side, 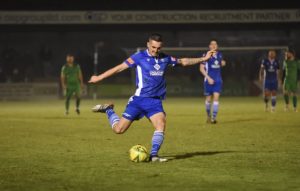 and the Blues came out on the offensive in the second period. Marlow’s cross to Jones was too far behind him, it fell to Davidson who had his shot blocked, before Henshaw tried to catch MacDonald off his line with a halfway-line chip, but the keeper backtracked and tipped it over the bar. But from the resulting corner came Merrifield’s third, 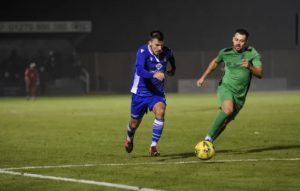 Foxley whipped it in and the man in form did the rest, nodding home from a yard out. He was soon replaced by Richardson, who was a different prospect for the visiting defence to deal with. He got his head on the first cross that came in from Marlow, but could only put it wide, before Henshaw’s smart clearance at the other end with Weatherstone waiting to tap in behind him. Good high pressure by Enfield saw Giddens make a mistake with a clearance, kicking it straight to Della-Verde, but Sam Mvemba recovered brilliantly to get a tackle in. A lot of the Blues chances also came from a high press, with Enfield Town happy to play it out from the back, but they were nearly the architects of their own downfall as Marlow won it high up and forced MacDonald into a diving save before Jones won a corner on the rebound. Marlow chased down a clearance by Henshaw into the right channel, the midfielder crossed to 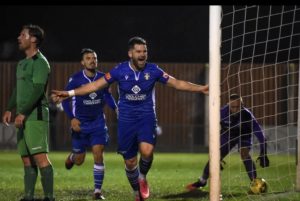 Richardson for a tap-in and the fourth of the evening for the Blues. A teasing wide free kick was claimed by Giddens before substitute Aaron Greene’s attempted chip over MacDonald was saved. Another attempted chip was misjudged, this time by Richardson who was advancing on Marlow’s through ball. Trying to take the shot early, he didn’t get enough height and MacDonald plucked it out of the air. There was a late cameo for 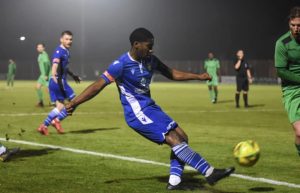 Michael Mullings, who came off the bench to make his competitive debut for the Blues. Slotting in at right-back he was calm on the ball, strong in tackles and did exactly what was required at that stage of the game. It could, and possibly should, have been more than four, given the flurry of late chances the Blues had, with Marlow missing an open goal from a similar position to where Richardson scored, with the striker turning provider. Greene fired wide after Richardson’s hold-up and through ball, before the next – and final – attack saw him shoot just wide of the far post from a tight angle.

The Blues are at home in FA Cup Second Qualifying Round action on Saturday against Brentwood Town before hosting Folkestone Invicta in the league on Tuesday.