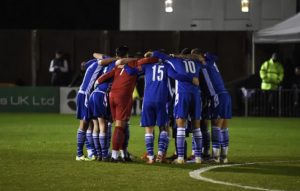 Bishop’s Stortford are through to the First Round Proper of the FA Cup for the first time in seven years after a 2-0 win at home to St Albans City. A capacity crowd of 600 were in attendance along with the BT Sport cameras for the first fully televised match in this season’s competition (matches had previously been streamed on BBC Red Button). First half goals for Darren Foxley and Aaron Greene were enough to see off the Vanarama National League South opposition, who experienced defeat for the first time this season in their sixth match, while the Blues are now unbeaten in 10 matches in all competitions this term. 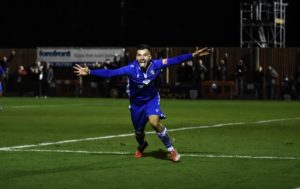 closed him down, with the kick rebounding off the winger’s outstretched leg and looping into the corner of the net inside three minutes. The old saying about being most vulnerable when you’ve just scored nearly came true for the Blues, with Mitchell Weiss striking the post with a low shot from the edge of the area after cutting in from the left, before Ben Marlow’s shot from a tight angle was saved by Matrevics. Another chance for Weiss came and went, he fired just wide of the left post after a left-wing cut back, with the visitors looking more 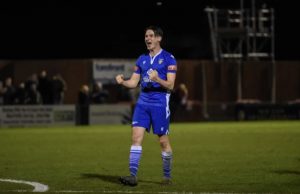 likely to get the next goal. Zane Banton had a shot from close range blocked by Mark Haines, and the following corner was headed wide by Dave Diedhiou. Bishop’s Stortford soon doubled their lead, as Greene ran onto Sam Robbins’ cross-field pass, and calmly slotted home past Matrevics inside the box. A short-corner routine didn’t come off as Shaun Jeffers miscued his right-footed effort on the penalty spot, allowing Ryan Henshaw 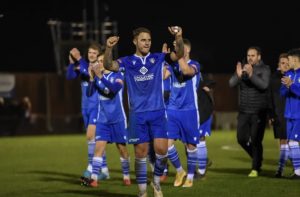 in to clear the danger. Another chance for Jeffers as he tried to curl one into the top corner but it was too close to Jack Giddens and he made an easy save. Matrevics’ confidence didn’t appear to improve, with a clearance hit straight to Marlow, but he couldn’t sort out his feet in time to get his shot away into the empty net. Saints captain Tom Bender played a brilliant cross right across the face of goal but no-one could convert, before Jeffers headed over the bar from a right-wing free kick. 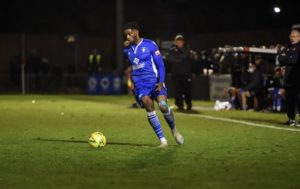 Half of the job was done for the Blues, and after the break they showed the defensive resilience that has been a huge part of their success in recent matches. Archie Jones was fouled on the edge of the box and Foxley’s cross was headed just wide by Jack Thomas. Frankie Merrifield couldn’t find the target after he was put through by Jones in the right channel, before Giddens denied 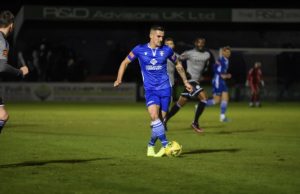 Banton with a great low save. Bender could only head over the bar from a left wing cross and substitute James Baker’s shot was saved by Matrevics. Foxley put Sam Mvemba through down the left, and Merrifield couldn’t convert from the left back’s cross, side-footing it wide on the half-volley. Late in the game and the defensive focus was still there, with Haines making a great interception to block a through ball in the box, before neither Tom Richardson or Correy Davidson could convert from Mvemba’s cross, which would have completed a quite brilliant performance and result. 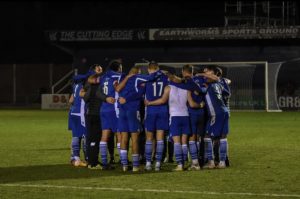 The Blues will travel to Brackley Town in the First Round Proper on the weekend of 7 November, after hosting Brentwood Town at home in the FA Trophy on Saturday 31 October.