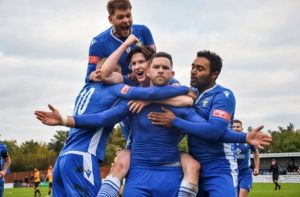 Bishop’s Stortford’s unbeaten start to the season extended to nine games with a 2-0 win at home to Cheshunt. The Ambers were top of the Pitching In Isthmian League Premier Division before kick-off, with five wins in six games, but two goals for Tom Richardson saw them drop from first place, as the Blues moved up to third. Richardson’s two goals move him to five in the league this season, joint top scorer alongside team-mate Frankie Merrifield amongst others.

The Ambers – who were victims of the Blues’ only league double last season – made a fast start, winning a free kick inside two minutes but Taylor Miles curled it over the bar. A concerning sight for Blues fans followed soon afterwards, with Aaron Greene going down injured, and had to be replaced by Richardson after just seven minutes. 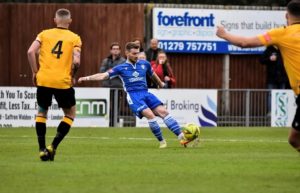 A teasing Correy Davidson free kick – starting in place of the injured Ben Marlow – found Darren Foxley but his flick went just wide. Mo Camara – who was sent off in the reverse fixture last season – had a good low effort saved by Jack Giddens, before Miles fired wide. Reece Beckles-Richards’ low cross from a quick free kick was cleared by Haines, and Foxley’s free kick just missed Richardson’s head. He didn’t fail to make contact from the next attack, Foxley’s corner was flicked on by Merrifield – who scored on Wednesday night against Royston Town from a similar position – but was blocked on the line, before Richardson reacted quickest and smashed into the roof of the net. Foxley and Richardson nearly combined to double the lead, but the cross to the back post was just off target. Adam Cunnington had a chance to head home at the other end, but Jack Giddens made a good save, before Shane Gore took the ball above head height with Richardson waiting to head home 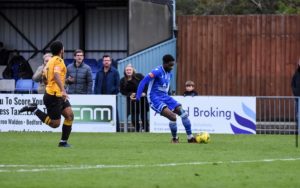 Sam Mvemba’s cross. Camara’s attempt to win the ball in the goal-mouth was deemed a foul as he knocked the ball out of Giddens’ hands, with Cunnington waiting for a tap-in. With the visitors growing into the game, the Blues pushed for a second before the break without reward, knowing that one goal might not be enough against a tough opposition.

Davidson’s low cross found Richardson in the middle who threatened to double the lead straight away after the break, but it flashed wide of the far post, before Richardson’s through 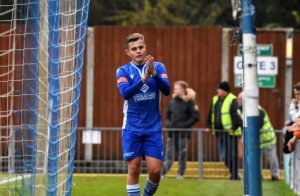 ball to Jones was overhit after the Peterborough United loanee had won the ball high up the pitch. A free kick in a promising position was put over the bar by Beckles-Richards, before Macsen Fraser inexplicably fired wide from close range after Cunnington’s knock down from Camara’s cross when it looked easier to score. Mvemba was in a great position to block Isaac Newton after he had brought the ball down in the middle of the box and fired goal-wards from six yards. Substitute David Knight injected some pace into the Cheshunt front line, getting in behind on a number of occasions, the first warning came as he shot across goal from the right hand side, but it went just wide. The visitors appealed for a penalty on the edge of the box after a tackle by Ryan Henshaw, before Tanasheh Abrahams showed his frustration and was booked for a foul on Richardson. 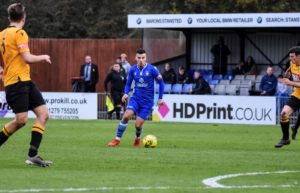 A fast and purposeful counter-attack eased some of the building pressure on the Blues, with Foxley driving forward. He passed to Richardson who found Mvemba out wide, his cross to Merrifield was a good one but his shot was deflected wide on the half-volley. From the resulting corner, Mark Haines – making his 50th appearance for the club – was brought down on the edge of the box, and Foxley’s free kick was well saved by Gore, before Knight’s low effort was gathered by Giddens. A clumsy attempt to gain an advantage by Taylor McKenzie saw him concede a penalty for pulling Richardson back while driving into the box. The number nine stepped up and smashed it down the middle to seal it, receiving a booking for removing his shirt in celebration. 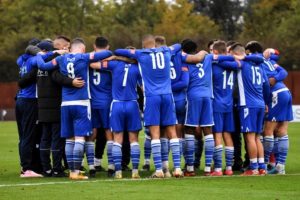 Bishop’s Stortford go third in the Pitching In Isthmian League Premier Division with their fourth win in six games, just one point behind Worthing in first and Cheshunt in second, with a game in hand on the latter. Tuesday’s fixture away to Worthing has been postponed to allow longer time to prepare for next weekend’s FA Cup Fourth Qualifying Round match at home to St Alban’s City.