Bishop’s Stortford began their pre-season with a 10-1 thrashing over tenants Enfield. After last season was curtailed and expunged, the Blues had been waiting 151 days to return to action, albeit behind closed doors due to the pandemic. 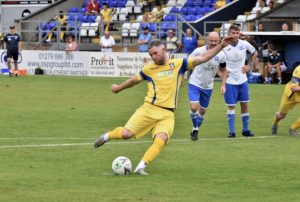 New signing Tom Richardson and Louie Johnson scored hat tricks either side of half-time while ex-Blue Olly Miles scored the consolation for Enfield.

Joe Boachie had the first effort for the Blues, trying to test Enfield goalkeeper Jack Wilmott early on with a shot from outside of the box, but it was blocked well by a defender, before Richardson ran in behind the defence but was denied by the onrushing Wilmott. It didn’t take long for the ex-East Thurrock United striker to beat Wilmott, he fired low across the goal after Callum Ibe h 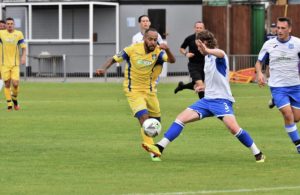 ad worked it well down the right wing and cut it back to Richardson. Aaron Greene made a similar run from the next attack, this time from the left, beating his full back and feeding Richardson, who tapped home from close range. Richardson completed his hat trick from the penalty spot after Greene had been fouled, striking high to Wilmott’s right. Jamie Cureton, who moved from Hornchuch to Enfield in the off-season, had a chance to reduce the deficit 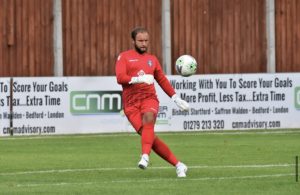 when he rounded Jack Giddens, but Ryan Henshaw was backing up well and cleared off the line. Greene brought down the ball well from a right wing cross, before some quick feet allowed him to beat his man and he fired home for the fourth goal of the afternoon before the first half drinks break.

Bradbury had a free kick headed away by Ben Marlow in the Blues penalty area, before the Enfield captain was required to break up an attack when Warman was primed to shoot on the edge of the box. 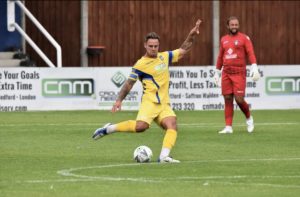 Henshaw had the ball in the net from a free kick but the goal was disallowed for a foul while jumping for the ball. Miles scored a tidy goal, beating Giddens across the goal with a low finish from a tight angle. Richardson showed off his hold up play on the left wing, waiting for team-mates to join him in the box, but he couldn’t find any of them with his cross.

After the standard mass change in personell at half-time, Louie Johnson stung the palms of Wilmott with a powerful strike from outside the box. 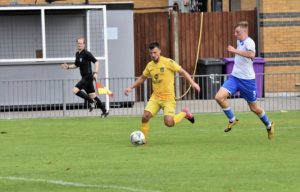 Darren Foxley took the resulting corner but Ross Debrick could only head behind. Foxley – who had a previous spell with the Blues before playing for St Albans City and East Thurrock United – than had a sight at goal from a free kick but he couldn’t find the target. Frankie Merrifield – who played mostly in midfield at his previous spell with the club before scoring 17 goals last season for East Thurrock United in a more advanced role – got on the score-sheet with some neat footwork inside the box, 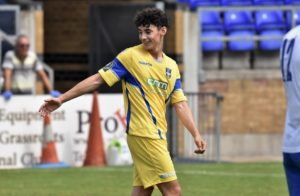 Johnson found him with his back to goal, he turned the defender and fired low past Wilmott. Johnson was involved with the next goal, his low cross from the bye-line wasn’t cleared in a defensive mix-up, allowing Foxley to prod home.

In a similar to position from which Foxley couldn’t find the target, Johnson found the back of the net with a superb curling effort, before adding his second just minutes later, bringing it down off his chest and firing home on the half-volley. Foxley turned provider for the next, with great centre-forward movement from Merrifield getting him in front of the defender at the near post to apply the finishing touch to Foxley’s cross. 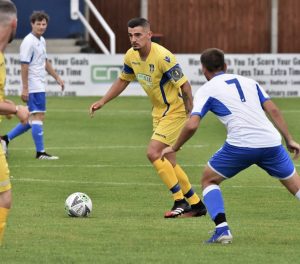 Coach Luke Callander was required to make up the numbers when one of the trialists pulled up injured and couldn’t carry on. The man who scored the Blues’ first competitive goal last season found Foxley over the top with an inch perfect through ball, and he unselfishly found Johnson at the far post who tapped home to complete his hat trick and round off a performance that the fans would have loved to witness.