Bishop’s Stortford suffered a third consecutive pre-season defeat at home to Peterborough Sports. Two goals in the first 10 minutes from Paul Malone and Josh McCammon put the Turbines in a strong position, and Cameron Johnson added one more before the break. 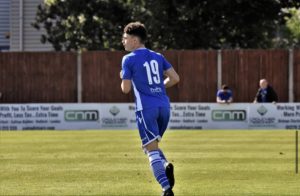 Louie Johnson came off the bench to score with 25 minutes to go, but the Blues failed to push on, conceding again from Jordan Macleod late on.

The side that knocked the Blues out of the FA Cup last season in the second qualifying round were once again victorious at the ProKit UK Stadium, which was welcoming fans for the first time in 165 days. The match had hardly kicked off when Malone had the ball in the back of the net for the visitors, heading home unmarked from a right wing corner inside two minutes, before McCammon double the lead four minutes later, with a powerful effort into the bottom left corner, past a despairing trialist in the Blues goal. Bishop’s Stortford showed good resolve to avoid capitulation, creating some chances as 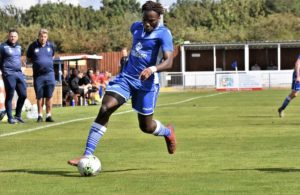 Joe Boachie had a tap-in chance saved from a left wing free kick, and Darren Foxley digged out a teasing cross from the left, before Boachie had another chance to score, his curling effort from the edge of the box was headed off the line this time. As well as the goalkeeper, the Blues had a trialist operating on the right wing, and he caused a few problems for the Peterborough Sports defenders. First dribbling past the left back and bearing down on goal, but he couldn’t keep the ball in play, then he created some space for himself to shoot on the turn, but his effort went wide of the left upright. Ross Debrick couldn’t find a teammate to apply the finishing touch to his cross from the left, before an inventive free kick by 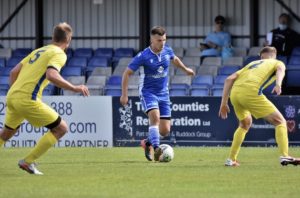 Foxley went just wide of the post with the keeper un-sighted and rooted to the spot. And the Blues were quickly punished for not taking their chances to score, as Johnson scored from the next attack, firing high into the left side of the goal from range to make it three. Three saves from the blues goalkeeper prevented any more goals before the break, denying Johnson twice, with Mark Haines on hand to clean up. 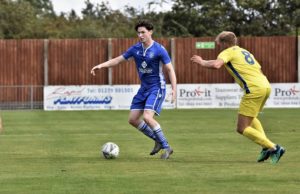 Defender Sam Mvemba and two more trialists started the second half for the Blues, one of which made an instant impact with a powerful run into the box before being tackled, but the referee waved away any penalty appeals. Johnson gave the home fans something to cheer about, firing a long range free kick through the arms of the Peterborough Sports goalkeeper into the top corner, his fourth goal of pre-season after his hat-trick against Enfield. A heavy touch from a promising position for the Turbines’ forward made an easy save for the keeper, when it should have been four for the visitors, before Johnson had a good chance saved when he cut in from a the right off a good run, but the keeper got down well to deny him a brace. Macleod converted into the top corner from the edge of the box with a first time shot from a lay-off to complete a routine victory for the Evo-Stick South Central League Division One Champions.