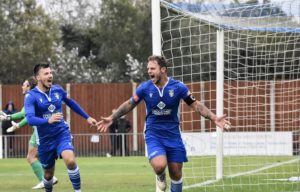 was the difference as the Blues hosted Hornchurch. It ends a run of 12 league games without a win, stretching back to December, when Jamie Cureton’s free kick sealed three points at Cheshunt. It also represents the first clean sheet of the new season, with Tuesday’s penalty shootout hero Jack Giddens making a number of brilliant saves towards the end as the Urchins – who completed a league double over the Blues last season with an aggregate score of 6-0 – pushed for an equaliser.

It was another bright start for the Blues – Darren Foxley’s low cross from the left fell to Archie Jones, 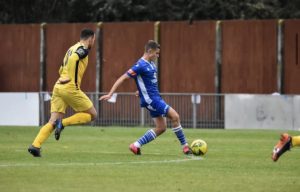 but his shot was deflected wide and Tom Richardson was denied by a brilliant tackle just as he was about to shoot inside the box. A training ground free kick routine ended with Marlow shooting wide from long range, before Jordan Clark tested Giddens with a low effort that the goalkeeper was equal to. Ex-Blue Rickie Hayles – who brought up his 200th appearance for Hornchurch in their FA Cup win at Bowers & Pitsea in midweek – had a brilliant game in defence, taking up great positions and putting in brilliantly-timed tackles. Peterborough loanee Jones went to ground after being tackled in the box but referee Aaron Farmer was not interested in any penalty appeals. At the other end, Jones made a brilliant block as Charlie Stimson let fly from the edge of the box. On a wet and windy day, shots that dip and bounce in front of the goalkeeper can be challenging, but ex-Blue Joe Wright was equal to a low effort from Foxley after he cut in from the right. The best chance of the half fell to Marlow, his header at the back post from Foxley’s corner was headed off the line, before Correy Davidson was flagged offside as he tried to head home Foxley’s cross.

Hornchurch manager Mark Stimson’s half-time pep-talk did the trick, as his side made a much brighter start after the break. Ex-Blue Lewwis Spence saw a low effort go just wide of the goal from outside the box, Jordan Clark had an effort blocked by Mark Haines, followed by three successive corners for the visitors as the pressure started to build. Henshaw volleyed over the bar from the edge of the box from a throw-in, before Ellis Brown struck on the half-volley from a knock down, but it was deflected into Giddens’ arms. Stimson caught the Blues defence napping on the counter-attack, but Haines recovered well to get a block in when the shot came in. The Blues seemed to be losing a bit of concentration in defence, letting Brown in behind the defence, but their blushes were spared by a brilliant save by Giddens, 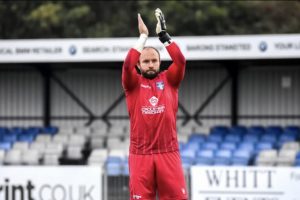 parrying the ball away from danger. From the resulting corner, Hayles got his head on it and Giddens was down low to dive on it. Stimson received a cut back from the bye-line that the Blues couldn’t deal with, but he put it wide when it looked easier to score. It proved to be that Hornchurch would rue missing the best chance of the match, as from the next attack, Aaron Greene whipped it a cross from the left and Henshaw jumped higher than the defender to nod home. The Skipper had hardly finished celebrating when he was next called upon at the back, clearing a dangerous cross from the right. Foxley should have doubled the lead when Frankie Merrifield’s cross fell kindly to him at the back post, but Wright did well to shut down the angle and tip his shot over the bar. Hornchurch packed the box for the next corner in search of an equaliser, but they were thwarted by 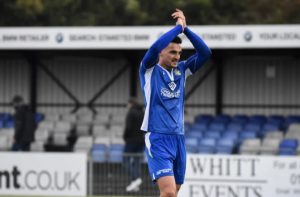 Giddens once more, tipping a close range header round the post. With the Blues soaking up the pressure, it was down to Merrifield and Joe Boachie to hold the ball up when it was cleared, and the latter dribbled into the box but his cut back was cleared. Into the four minutes of added time and Chris Dickson had an overhead kick attempt off target, with Sutton smashing the rebound but only into Giddens’ arms. The crosses were flying in, Dickson headed wide before Sutton’s shot was blocked by a combination of the two players-of-the-match – Henshaw and Giddens putting their bodies on the line to preserve the clean sheet, even in the dying seconds of an enthralling match. 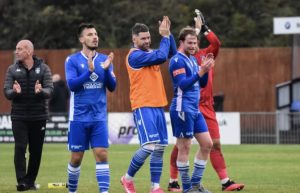 The Blues host Enfield Town on Tuesday night in Pitching In Isthmian League Premier Division action, before the visit of Brentwood Town in the Second Qualifying Round of the FA Cup on Saturday.