Jamie Cureton continued his fine goal-scoring form by snatching a late winner from the penalty spot against East Thurrock United. 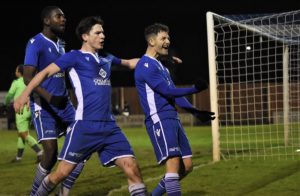 The Blues’ player-manager has recovered from a goal drought of nine league games to score five in the last five, converting from the spot against the Rocks in injury time at the end of a thriller at the ProKit UK Stadium.

Ryan Henshaw had the first scoring chance of the match, when he headed towards goal from Alex Warman’s long free kick, but goalkeeper Jack Giddens saw it go wide of the post. 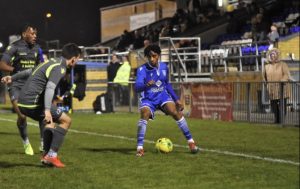 Mitchell Gilbey – who was the danger-man for the visitors all match – shot from long range soon after but Fred Burbidge judged the bouncing ball well to claim the effort.

Ex-Blue Darren Foxley – who played for St Albans against Bishop’s Stortford last month – missed a great chance to open the scoring, after another ex-Blue Frankie Merrifield had shot straight at Burbidge from a tight angle, the ball was parried into Foxley’s path and he could only clear the crossbar from six yards out. 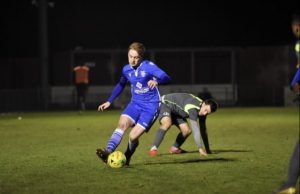 Another chance for Gilbey came and went, after he cut inside from the left, beating Jordan Wescott, he fired at the top corner, only for Burbidge to get across well and catch the ball.

David Manu skied an effort from the edge of the box after Cureton had laid it off to him, before Henshaw had another headed effort but this time it went high of the bar.

In the last action of the first half, Gilbey did well to keep the ball in play in the corner, but his shot was straight into Burbidge’s arms.

Before the penalty that was given late on, referee Stuart Cheek waved away claims that Manu’s legs had been clipped as he approached the bye-line, telling the winger to get up off the ground. 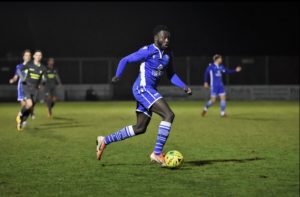 Manu saw another effort at goal go high, after Wescott’s long ball was chested down by Cureton with his back to goal, the 44-year-old played in Barnwell down the right, who possibly should have taken a shot but instead laid it back to Manu who didn’t test Giddens.

Barnwell had a shot from the next attack, cutting in onto his favoured left foot he could only find Giddens’ gloves with a curling effort, before Gilbey tried a backheel flick towards goal, that Burbidge took well. 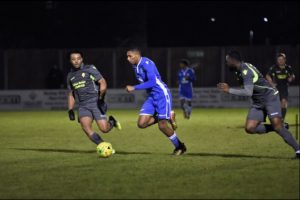 Ryan Charles ran onto a bouncing ball on the edge of the box and volleyed towards goal, with Giddens rooted it looked as though it would be the breakthrough, but it went wide of the right post.

Gilbey fired a low free kick across the box, but the wall did its job to divert the ball away from danger, before Barnwell had a great chance with his head, but he jumped to early from Cureton’s cross.

Charles had another chance late on, and with Cureton free for a tap-in in the middle, he shot wide from a tight angle.

And in the second minute of added time, Barnwell was fouled in the box for a certain penalty, and – after missing his most recent penalty as regular penalty taker – the big forward straight away gave the ball to Cureton to do the honours. 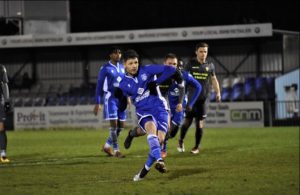 He fired it past Giddens – who had guessed the right way – high to the keeper’s left, to seal the win after it looked for a long time that this entertaining encounter would end goalless.