We are delighted to announce the signing of striker Jason Banton, who joins us on loan from Kingstonian for the remainder of the season.

Jason is a former England U17s international who spent the majority of his youth career with Arsenal before spells with Blackburn Rovers, Liverpool and Leicester City followed.

The 29 year old made his football league debut whilst on loan with Burton Albion before being drafted by the Seattle Sounders in the MLS Superdraft in 2012.

Returned to the UK with Crystal Palace, debuting against Stoke City in the FA Cup, before successful loan spells with Plymouth Argule and MK Dons followed.

Joined the Pilgrims permanently in 2014 and went on to feature for the likes of Wycombe Wanderers, Hartlepool Utd, Crawley Town and Woking in subsequent years.

Joined Kingstonian at the start of the current campaign and now links up with Steve Smith’s men on loan as we enter the business end of the 21/22 season.  Welcome to the R&D Advisors UK Stadium Jason! 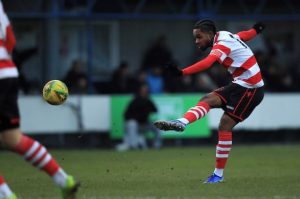