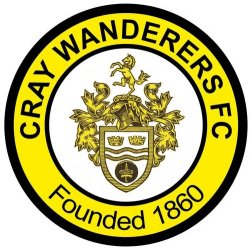 Blues will look to bounce back from Saturday’s loss at leaders Folkestone Invicta when they host Cray Wanderers, kick-off 7.45pm

It will be the first time the sides have met, although Blues have travelled to their Hayes Lane ground on many occasions to face Wanderers’ landlords Bromley.

Wanderers returned to the Isthmian League Premier Division after year absence as they won the South-East Division last season.
They have made a quiet start to life back in step 3, taking seven points from six games with a win against Margate and their only loss coming against leaders Folkestone. They are three places behind Blues in 15th spot.
Cray started their FA Cup campaign a round earlier than Blues, causing the game between the sides in August to be rescheduled, and they have progressed with home wins against Hythe Town and Bedford Sports to set up another home tie, against Soham Town Rangers.