VOTE FOR YOUR DEVINES PLAYER OF THE MONTH FOR AUGUST

It’s time to decide on Bishop’s Stortford Football Club’s Devines Player of the Month — who will you vote for?

The ‘21/22 season has started off with some unfortunate results for Steve Smith’s squad, who are yet to pick up their first win despite showing plenty of spirit in their opening four fixtures. The manager isn’t worried however, explaining,

“We keep going. We dust ourselves down, go Saturday and hopefully get back to winning ways”

The first game of the season saw the Blues travel to Bognor Regis in what turned out to be a stalemate despite The Rocks falling down to 10-men in the first half. Although not the win we were hoping for, this 0-0 result meant the Blues would remain unbeaten in the Pitching In Isthmian Premier, as they had been since the start of last season.

Our first competitive home game of the year since last October was against Kingstonian FC, and it was truly a game of two halves.  In it, we saw the Blues equalise before half time, concede two shortly after the break, and manage to shrink the deficit with a spectacular Jonny Giles strike from 25-yards before Kingstonian’s Ajakaiye sealed the back-and-forth match for the visitors by completing his hat trick.

Although hoping to bounce back straight away, the Blues fell to a second straight defeat away to Carshalton. The 2-0 scoreline was emphasised by regrettably missed chances for Jake Cass and Bobby Unwin.

Our final game in August took place back at The R&D UK Advisors Stadium in Bishop’s Stortford, with the Blues drawing 2-2 against Bowers & Pitsea. The Bowers’ Number 9 scored twice, whilst Frankie Merrifield and Jake Cass scored a goal and a penalty-kick for the hosts. Merrifield got the hosts off to an inspired start, capitalising on a goalkeeping error to strike within 5-minutes. The Blues then fell behind in the second-half before Cass levelled the game from the spot with an excellent penalty that cannoned into the goal, in off the post.

So, with August and the Summer now behind us, who was your Devines Player of the Month? 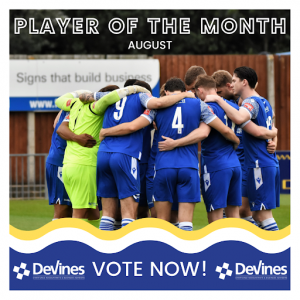