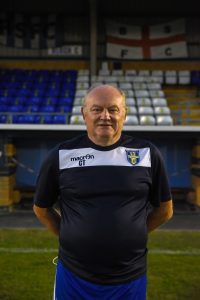 Blues physiotherapist Colin Taylor has announced that he is retiring from the role.

The popular physio has been at the club since 2003, serving initially in a variety of capacities including Steward, Kitman, Assistant Physio and finally for many years as the club’s lead physiotherapist, taking responsibility for the first team, academy and Community Clinic.

Speaking about his retirement Colin stated; “I’ve worked under a number of managers, seen many players come and go and met some great people.  I’ve enjoyed every bit of it but now is the time to step back and pass on the mantel”.

Blues players and officials past and present were full of praise for the long tenured physio:

It will be odd to come to the football club and not see Colin, he seems to be part of the fabric of the Club, in my time at the Club he has been a fan, and a steward but that wasn’t enough for Colin, he then joined the behind the scenes team at the club and joined the physio team, initially as number 2 (which was the inspiration for one of his nicknames) until he became physio for both the first team and our academy teams – endless hours spent attending matches, pre match strappings, training sessions and also assisting players with their rehabilitation.

All at the Club of course wish Colin all the very best in his well-earned retirement, I’m sure he has enough hobbies to keep him amused, from his baking, cacheing (yes it is a real thing), cooking and of course following his racehorse, not many are aware Colin is a part owner of a racehorse called Woodside Wonder (one can only guess where the horses name came from). Good luck Number 2 – you’ll be missed ! – Ian Kettridge, Chairman of Bishop’s Stortford FC

I’d like to thank Colin for his many years of service at the club. In my time here Colin has always been a credit to himself and the club, and he will be missed by all of us. Hopefully we will still see him back here as a supporter, he will always be welcomed back by us all. Good luck Col, and thanks for everything – Steve Smith, Owner/Manager of Bishop’s Stortford FC

I had the pleasure of working with Colin during my 5 years at Stortford and have many fond memories of his lovely Mum and late Father and their fantastic support for the club.  Colin would consistently look to improve his skills with courses and always had the players’ welfare at heart.  He served alongside me through thick and thin, through those difficult seasons ‘up north’ and his loyalty, dedication and effort was always tremendous. Colin is a very good man who has given his heart and soul to a fantastic football club and I’m sure h will be sorely missed by all. To serve for so long at any club is an incredible achievement and I want to wish him all the best for the future – Rod Stringer, former Blues Manager

It was an absolute pleasure to work alongside a gentleman such as Colin.  He is a true legend around the club and I wish him all the very best for the future – Dwight Gayle, Newcastle Utd striker and former Blues loanee

Colin has been a top guy to me from the time I joined Bishop’s Stortford he’s looked after me and kept me fit and ready to play he’s always available and gives his time to all. I wish him nothing but the best in his retirement, enjoy Colin! – Jamie Cureton, former Blues player/Manager

Congratulations on your retirement Col, a long and distinguished career with Stortford. You’ve seen many manages, including myself, but always the consummate pro on the bench. Not least when you treated me having hit my head on the corner of the dugout, you even arranged for it to be covered in foam so I didn’t do it again!  Wish you all the very best mate  – Kevin Watson, former Blues Manager

Happy retirement Colin!  A great servant to the club for so many years and a really nice guy who was always there for a chat if needed.  I wish you all the best! – Reece Prestedge, former Blues skipper

Where do I start with Mr Colin, spent many hours with this man. One of the nicest men you could meet. The man with many stories, I say no more. True legend and a fantastic guy who played a huge part in my career who I owe a lot to. Happy retirement Col!  – Johnny Herd, former Blues skipper

Colin will be sadly missed I am sure from all at the football club – a real genuine caring character that would always go above and beyond to help you with any injury you had. His physio room was always very welcoming (probably too much for the manager) and he is a very well liked character from all I know that have worked with him. A well deserved retirement to a great servant for the club and a good human being, thank you Colin – Anthony Church, former Blues skipper

I really appreciated all of Colin’s hard work whilst I was at Bishop’s Stortford, I was in the physio room a bit too often as I’m sure Mr Stringer would agree!  I wish Colin all the very best for the future, enjoy your well deserved retirement! – Mikel Suarez, former Blues striker

I first met Colin when he first came to the club back 2002/03 he was Dave’s assistant physio but was my reserve team physio, he was quiet back then, we met again in 2016 when I was first team manager this time Colin was main physio larger than life, a real gent. Colin is a giving person and is always on hand to help or offer his services for great causes which he did to help during a Mental Health Charity Game for MIND, this really shows the man that he is, a very likeable person, a very good physio, who will be missed, Colin has time for people and has a heart of gold, enjoy your retirement you deserve it – Gordon Boateng, former Blues Manager

Colin is a really engaging, likeable character and a valued member of the staff during my time at the club who was very good at his job.  All the best for the future – Steve Pitt, former Blues Head of Scouting & Recruitment

Colin is one of those club workers behind the scenes who rarely gets mentioned.

He has put in well over a dozen years of hard work and dedication to the treatment of the players at Stortford and the number of first team matches he has missed in that time can be counted on the fingers of one hand. Also, it shouldn’t be forgotten that Colin was also physio for ten or more years to the Blues Academy side playing in midweek. He will be greatly missed – Graeme Auger, Blues Club Statistician

It has been a delight to share so many match days and coach trips with Colin, wonderful company and a lovely man. He also makes a fantastic Victoria sponge!  Thank you Colin, wishing you all the very best – Fred Plume, Blues Club Secretary

Colin is a genuinely likeable and reliable man who has been a cornerstone of the club for a long time now.  We’ve shared many a laugh on long coach journeys to away games around the country and his presence will be very much missed around the place. I wish him all the very best in his retirement! – Mike Plume, Blues Head of Media

On behalf of the Supporters Club we shall miss Colin in the dugout and with his 50 yard sprints with the wet sponge! Colin has been a loyal servant to the club, always finds time for a chat and would offer advice whenever he could. We will also miss his cooking stories and his cakes!  Happy Retirement Colin! – Darren Woollard, Blues Supporters Club Chairman