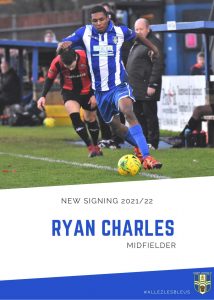 The popular winger has scored 16 goals in 59 appearances for the club to date.

‘Spider’ recently played at Wembley as Concord Rangers were runners-up in the delayed 2019-20 FA Trophy final.

On his decision to return to the club, Charles said “the club is very ambitious and driven for success. I felt as I’ve got older my passion for success has grown more and I feel me and club have aligned with the same goals. I know most of the players already at the club, get on really well with them all, speaking to some of them before hand, I think it’s a known fact what everyone is looking to achieve next season and I’m hoping to play a part in that.”

Unlike some of the Blues players from last season, he has continued playing since December, leading up to a big Wembley final last month, “playing at Concord last season our league season finished around the end of February, however we began light training preparing for Wembley within a week or two and the proper camp 2-3 weeks after that, so although there have been a couple weeks break here and there, it’s more or less felt like a full season excluding injury.”

Charles added he’s looking forward to meeting up with the squad, containing some old friends, “I’ve spoken to a few players, both returning and new signings, I know most there and get on really well with them all, so it will be good to see them all again and see what the coming season has to offer.”

After suffering an injury-hit start to last season, staying fit will be his main target during the pre-season games, but he also said he’ll be delighted to play in front of the Blues fans again, “I missed most of the previous pre-season due to injury and missed out on that start of the season feeling, it’s important I stay fit this time round and familiarise myself with the new squad. I’ve always enjoyed the atmosphere at Stortford, the crowds can reach really good numbers and they are very passionate so hopefully we can produce a successful season.”

Charles reiterated his fitness goals for the new season, as well as contributing more with goal involvements, “my number one target will surely be staying fit, I missed out on a lot last season and it took a while to get right, no doubt niggles will occur throughout the season but priority will be staying fit and managing myself. I would like to add more goals and assists to my record and hopefully establish myself in a more prolific way.”