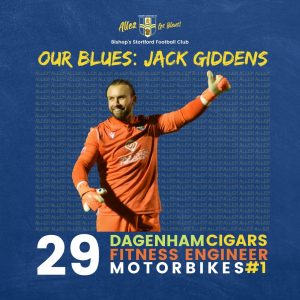 What are your biggest interests outside of football?

You’ve just won your second AB1 League Goalkeeping Award for the season, and are in the running to win this season’s award for clean sheets – how proud are you of the efforts from our back-5 this season?
Very proud! It’s always nice to win personal awards but it’s been a team effort all season – not just the defensive line, but from all the boys. We pride ourselves on defending from the front.

Have there been any standout moments or fixtures for you so far this season? Bognor away – the first game of the season. It was so nice to play competitive football again after the pause of the league due to the pandemic.

How do you feel the changing room at BSFC compares to those from your previous club? What’s the atmosphere been like?
We have a great set of lads, with a mixture of all ages and characters. Every one of the boys are great humans and we all have that winning mentally – that’s what makes the squad so special!

How have you found playing at the R&D Advisors U.K Stadium this season?
I’ve thoroughly enjoyed playing at home this season, especially with the amount of support we’ve been getting as a side! The support from the fans doesn’t go unnoticed – so from me and the boys, I’d like to thank you all for your support! Keep getting behind us and let’s achieve big things together!

How is the squad looking to react against Brightlingsea Regent F.C, after our unbeaten run came to an end last weekend away at Hornchurch F.C?
After watching the game back I felt we were the better side overall but things didn’t quite fall for us on the day. That’s football. We’ve dusted ourselves down, had a good week on the training ground and are ready to get back to winning ways this weekend!