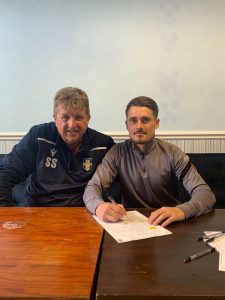 Charley Barker is the latest addition to Steve Smith’s squad. The former Braintree Town and Leyton Orient midfielder spoke to the Club’s media team recently.
You can watch the interview on our YouTube channel.

Barker said that his decision to join the Blues was made due to shared ambitions for promotion. “The gaffer’s an ambitious guy, the club matches that and it matches my ambitions. It’s a club that wants to get promoted fairly soon and when a team’s got that ambition it puts a little bit more pressure on yourself to do better. That’s what I want out of the game, is to play for the best teams in each division.”

On his style of play, he described himself as a well-rounded midfielder. “I can play in a midfield role, attacking or defensively, not shy of a tackle and I like to think I can keep the ball well for the team and hopefully create some chances for the front men.”

Talking about settling into the squad, he praised his teammates for helping him acclimatise. “It’s a great group, the boys have welcomed me in well. Training is good so far and we’re laying the foundations early on so I’m really looking forward to it.”

Barker said he’s been keeping fit, even while not playing in recent months. “I’ve been trying to keep fit, ticking over as best I can, obviously it’s tough with the situation that everyone’s gone through but keeping fit is part of my nature so it wasn’t too hard for myself.