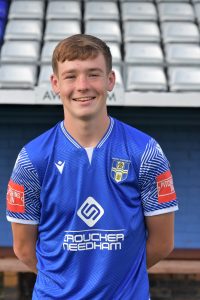 Bishop’s Stortford Football Club is proud to announce that Mick Ryan has sponsored Blues academy captain and recent first-team debutant Charlie Allum for the ‘21/’22 season. Mick is Charlie’s grandfather, and has supported him from the stands at several fixtures this year.

Allum made his first competitive appearance for the Blues in our 3-0 FA Cup victory against Lowestoft Town at the end of August, having scored the winner in the academy’s FA Youth Cup win over Hornchurch earlier that week. The technical central midfielder has previously represented Cambridge United and Colchester United youth teams.

Mick will receive a signed shirt from Charlie at the end of the season, and his name will feature alongside Charlie’s in the programme. If you’d like to sponsor a first team or academy player at Bishop’s Stortford Football Club, please email generalmanager@bsfc.co.uk for more information 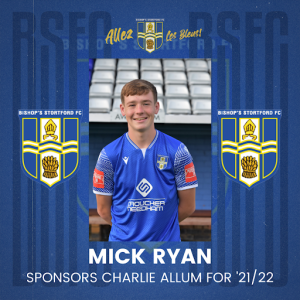