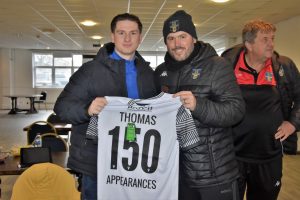 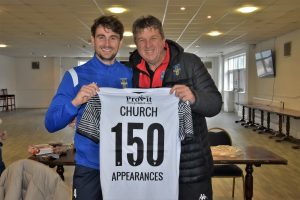 Since our last home game here at the R&D, midfielders Jack Thomas and Anthony Church have both surpassed the 150-appearance mark for the club.

Church made his Blues debut back on 1st August 2013 in a 6-1 Herts Charity Cup win here over Ware.  His first goal for the club came in a 5-0 win at Hendon in the FA Cup 2nd Qualifying Round which was played on Sunday 29th September 2013.  Famously Kyle Vassell netted the other four goals in that tie.

He featured 116 times under Rod Stringer’s management between 2013 and 2016 before joining Stringer in switching to National South side Chelmsford City, where he Captained them with distinction for five years.

He returned to the club at the beginning of this campaign and passed the 150 mark at Enfield Town last Saturday.  He has netted 22 goals to date.

Jack Thomas has been a real success story of the Blues Academy. He spent two seasons with the Academy under Tim Moylette’s stewardship, where he made 36 appearances, netting 5 goals including three appearances for the Blues in the FA Youth Cup.

Jack made his senior Stortford debut on 16th September 2017 in a Herts Charity Cup Semi-Final tie at home to Hitchin Town which was lost 1-2. His first Blues goal came in a 1-5 defeat here against Cray Wanderers in the Isthmian League on Tuesday 17th September 2019. It was a 20 yarder at the Airport End and remained his only goal until his strike at Haringey Borough in February.

It has been a season of milestones so far with Sam Robbins, Ryan Henshaw and Frankie Merrifield all passing the 100 game mark, with Ben Marlow and, most recently, Jack Giddens both hitting 50 Blues games.

Congratulations to all of those players, who have provided terrific service for the club.

With special thanks to our official Club Statistician Graeme Auger for his assistance with this piece.