FRANKIE MERRIFIELD IS DEVINES’ AUGUST PLAYER OF THE MONTH! 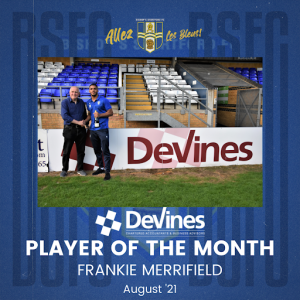 Frankie Merrifield has been voted by Blues fans as the DeVines Player of the Month for August thanks to goals against Brightlingsea Regent, AFC Hornchurch and Bowers & Pitsea in the league, as well as a hat-trick of assists for Jake Cass in our 3-0 victory over Lowestoft Town in the FA Cup.

After his match-winning performance against AFC Hornchurch, Frankie said “I want to score as many goals as I can – I’m a goalscorer. But if I get three assists and three goals for Cass, I’ll take that all day.” The Blues #10 has been forming a formidable partnership with striker Jake Cass, regularly trading goals and assists either leading the line alongside the #9 or operating in a slightly deeper position behind the centre-forward.

On behalf of everyone at the club – congratulations to Frankie! We are all excited to see his form continue at the R&D Advisors UK Stadium when we welcome Leatherhead this Saturday.