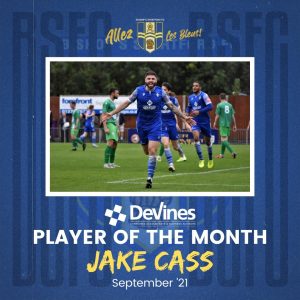 Jake Cass has been voted by Blues fans as the DeVines Player of the Month for September thanks to hat-tricks against Lowestoft Town in the FA Cup and against Leatherhead in the league, as well as a strike against Brightlingsea Regent away.

After his dominating  performance against Leatherhead Cass elaborated on his blossoming strike-partnership with Frankie Merrifield, who got a hat-trick of assists for our #9’s three goals in their FA Cup display:  “The pair of us, as the season goes on, there’ll be a very even split between us – hopefully a lot of goals!”

On behalf of everyone at the club – congratulations to Jake! We are all excited to see his form continue when we welcome Margate FC to the R&D Advisors UK Stadium on 23rd October.