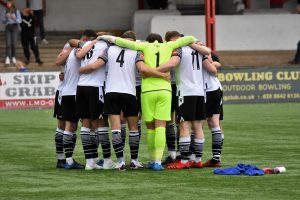 Bishop’s Stortford suffered a second consecutive defeat in the Isthmian League Premier Division on Saturday, losing 2-0 at Carshalton Athletic. Both sides came into the match with a draw and a defeat from their first two matches, but it was the Robins who came out on top, thanks to goals from Daniel Bassett and Jalen Jones. 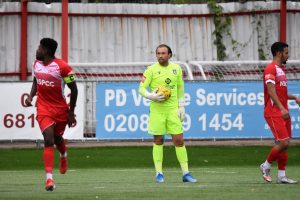 Lewis White played a deep cross from the left that missed all his team-mates, before it was worked to Bassett whose shot was saved by Jack Giddens. The Blues had a free kick in a promising position after a foul on Aaron Greene, Jonny Giles’ effort deflected off the wall into the path of Merrifield who crossed to Greene, but Lloyd Thomas managed to palm it away before Greene 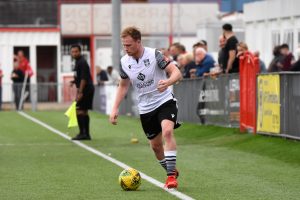 could get his head on it. Bassett opened the scoring from the next attack, with a brilliant chest control and volley shot into the bottom left corner from the edge of the box. Daniel Bennett’s through ball towards White was overhit and the winger couldn’t get a shot away. Bennett then tried to chip Giddens from a tight angle on the left hand side, but saw his shot hit the roof of the net, before the Blues could have had a penalty for potential 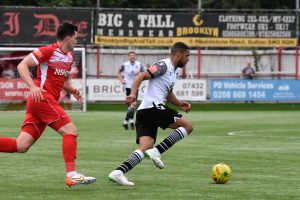 fouls on Frankie Merrifield and Archie Jones, instead the referee gave a free kick the other way. There was nearly a Blues equaliser from nothing, when Bobby Price’s pass back to Tomas was wayward, and looked destined for the bottom corner, but the keeper scrambled across and cleared the danger. Giles had a shot saved after cutting in from the right and firing low at goal, before the no7 whipped in a free kick which neither Merrifield nor new signing Jimmy Wallace could get their heads to, before another Giles free kick fell to Haines, but his drilled crossed was palmed away by Thomas. The Blues were growing into the game as the first half came to a 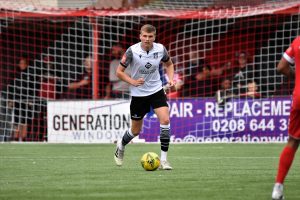 conclusion, and were the only side looking likely to score, Merrifield had a shot from a free kick blocked by the wall and Anthony Church’s rebound effort was also blocked, before Giles and Greene combine in attack, with the latter claiming his cross towards Archie Jones in the middle had struck a defender’s arm on the way through, but the referee disagreed. Price blocked a low Aaron Greene Cross out for a corner, before a succession of corners by Giles ultimately came to nothing of note.

Bassett’s deflected shot found the side netting and Wallace headed away the following corner, before Merrifield laid the ball off to substitute 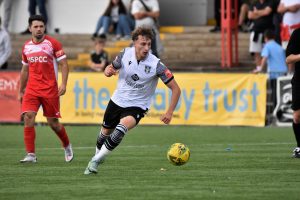 Bobby Unwin who cut inside and shot with his left foot but Thomas saved. Wallace recovered well after White had beaten the offside trap to see the ball out for a goal kick, and Unwin missed a brilliant chance to equalise. With an open goal to aim for, he shot over the bar from a left wing cross. Tommy Bradford attempted a halfway line chip over Giddens’ head when he spotted him off his line, but the ball landed behind the goal, before Bassett won a corner with a smart turn and shot forcing a save from Giddens. From the corner, the Robins doubled their lead with 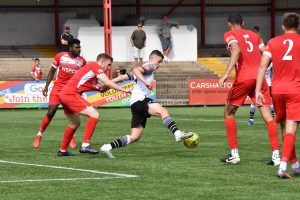 Jones smashing home from close range, with Giddens thinking he had been fouled which meant he couldn’t catch the ball. Jake Cass headed over the bar from Giles cross before Giles had a shot blocked. Price shoots from Bradley Williams’ lay off but fired wide, before Giddens smothers the ball at the feet of an attacker to prevent a close range shot. John Ufuah had a great chance to increase the margin of victory for the hosts, when he stayed onside and tried to go round the onrushing Giddens for an open goal, but the keeper quickly retreated to his line and the defence shut down the shooting angle and cleared. Another Cass header, this time striking the cross bar, from a Giles cross, before a powerful effort from Merrifield went straight into Thomas’ gloves.

The Blues host bottom of the league Bowers & Pitsea on Monday, before entertaining Lowestoft Town in the FA Cup on Saturday.