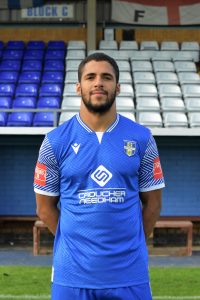 Bishop’s Stortford Football Club is proud to announce that ActionPhotosTH have sponsored Blues striker Frankie Merrifield for the ‘21/’22 season. ActionPhotosTH are members of the Essex Senior League Media team, and is made up of supporter’s club member Tim, who has coached at BSCFC for seven years, and his son Teddy, who plays for BSCFC U14 United.

Frankie Merrifield  is in his second spell with the Blues, having previously played his football in Bishop’s Stortford between 2014 and 2016. Our #10 was our top goalscorer in last season’s curtailed campaign, netting eight goals in thirteen games, including a hat-trick. He recently scored the winner in our first Pitching In Isthmian Premier win of the season against AFC Hornchurch.

ActionPhotosTH will receive a signed shirt from Frankie Merrifield at the end of the season, and their name will feature in the programme alongside their sponsored player’s. If you’d like to sponsor a first team or academy player at Bishop’s Stortford Football Club, please email generalmanager@bsfc.co.uk for more information. 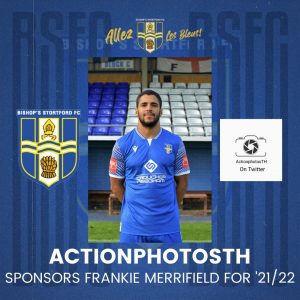