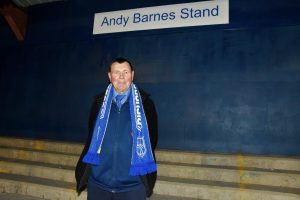 Keith Barnes was on hand on Saturday to help officially dedicate the Town End Stand as the ‘Andy Barnes Stand’.

Keith is the Father of Andy Barnes, who was very much Mr. Stortford. A lifelong fan who dedicated all of his time supporting BSFC. At one point he went over ten years without missing a game, home or away.

A larger than life character, he volunteered at the club whenever he could, manning the turnstiles and often carrying out a variety of other thankless tasks. When not supporting the club he raised thousands for charitable causes, notably the British Heart Foundation, running several London Marathons.

Andy sadly passed away suddenly in February 2007 at the age of 34. He is still greatly missed by his family, friends and all long-standing Blues supporters. He was a one-off and one of our own.

With thanks to Gareth Stephens